The high speed train station in Zaragoza, was designed by the architects Carlos Ferrater and José María Valero, with Felix Arranz and Elena Mateu, who had the collaboration of the engineer of roads Juan Calvo and the engineer of installations Juan Broseta, from the Engineering Civil and Technological Projects SA of Valencia. 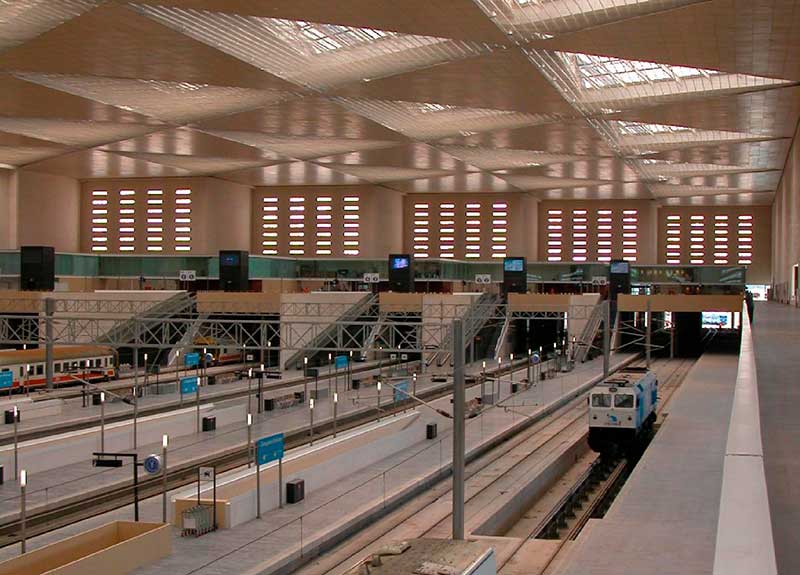 Alabaster stone in the walls of the high speed train station of Zaragoza. Arastone.

During the pre-project and drafting phase, architects Manuel Bermudo, Gonzalo Urbizu, Jesús Marcuello and Montse Abad collaborated. It is a station with a large interior space of more than six hundred meters in length and eighty in width, formed by three lobbies that organize the circulations of the travelers through an area of exits and another of arrivals and the “tranfer”, through a central underground access.
It has 18.8 ha divided between services intended for visitors in general and spaces occupied directly for transport functions. Only for rail transport has ten routes, with a length for each platform of 400 m. On the south façade of the station was the construction of the Aragon Railway Museum, under an imposing cantilevered canopy, but never built and remained unfinished. The main façade, north, looks at the meander of the river Ebro and Expo 2008 territory offering as a presence a huge geometric arabesque with straight lines.
One of the most innovative elements of this project is its roof, which from the distance offers an unusual profile with its large arches diagonally over the body of the building, a deck of tetrahedrons that capture the light and its large dimension, reminiscent of an inverted catenary. The translucent alabaster stone used as windows in the walls allows the passage of light, either natural or artificial, offering extraordinarily and beautiful effects. 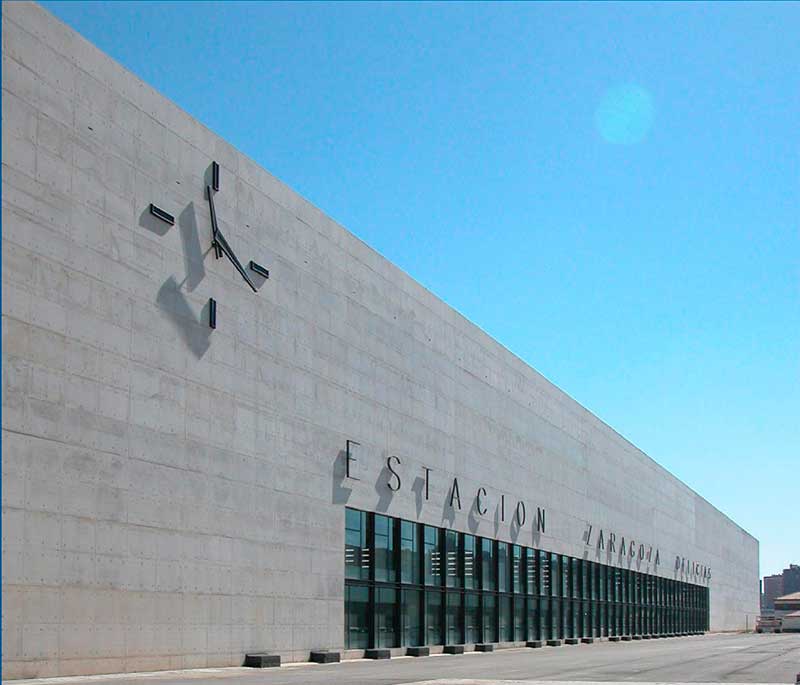 The main deck has a surface area of 44 000 m² and is composed of a triangular mesh as a chessboard, alternating triangles of light and shade, which give the station natural light. In the central area of the terraces the ceiling height reaches 30 meters, in an area where there is not a single pillar that supports the 4,4 ha of ceiling roofed with skylights arranged in the form of a triangular mesh. Its shape in plan is that of a “rhomboid stepped”, composed by the union of the silhouettes of five rectangular parallel modules (of 22 m × 395 m each, displaced 22 m according to its greater side with respect to the next). The free light of the deck is 110 m.7 The unusual arrangement of the arches that hold it (45 ° away from the sides of the ship), makes it exceed 150 m between supports.

It was recognized by the FAD Awards to Architecture and Interior Design in 2004 and the Brunel Prize in 2005 in his 22nd edition.

This is only one of our projects. If you want to know about our alabaster stone, uses, applications,  and more you can visit our projects page here:

We are international alabaster suppliers. For architects and construction. Also we sell alabaster for carving, for sculptors and artists. If you want to get in touch to ask for any doubt related to your project (small or big projects), here we are:

To be in touch via e-mail:
Get in touch here!

We are also available by phone: