Aragon has the privilege of having the largest known exploitable deposits of alabaster. There are two different sites, which are geographically separated. The most important one corresponds to the Fuentes-Azaila area, in the Tertiary Ebro Basin. The other area where this resource is present is the Calatayud-Teruel Basin, which divides the Iberian Range in two main sectors (NW and SE).

Alabaster stone can be found in an area limited to the North by the villages of Fuentes de Ebro and Pina de Ebro, and the Zaragoza-Barcelona national road, reaching the village of Albalate del Arzobispo and the Martín River to the South; to the East this area extends towards the Alborge-Bujaraloz road, and to the West towards the village Belchite, covering a wide area of ca. 120,000 Ha.

This area corresponds to the Tertiary continental rocks of the Ebro Basin. The stages in which traces of alabaster appear are the Oligocene and the Miocene, and materials are arranged in either horizontal or very low-dipping beds.

It is precisely the horizontal arrangement of the rocks that makes it easier to exactly determine the heights at which the alabaster stone levels are located: at 185m; at 230m; between 245-250m (great quality and high-transparency alabaster) and, finally, between 280-290m. The beds in which alabaster stone occurs are up to 1m-thick, and they can attain up to several hundreds, indeed thousands, of metres in length, even though there can be considerable changes in thickness and colour among nearby areas. 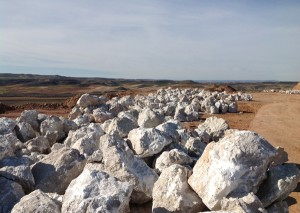 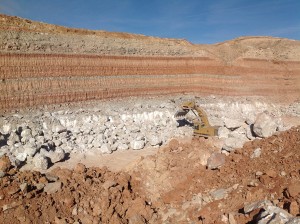 The minimum thickness for a bed of alabaster to be considered exploitable is around 35-40 cm because the alteration film surrounding the nodules must be removed before clean alabaster stone may be extracted.

The two aforementioned Aragon varieties (transparent and “buñuelo” -bun-) correspond in turn to two different geological sites. The transparent-type alabaster integrates more or less continuous bodies with slight changes in thickness at quarry scale. On the other hand, the “buñuelo” -bun- type appears as isolated ovoidshaped nodules immersed in the clay mass surrounding the nodule and conform continuous levels of boulders at quarry scale.

The estimation of resources for the Fuentes-Azaila area in Aragon, according to 1990 data from ITGE (nowadays IGME: Geological and Mining Institute of Spain) is approximately 31,362,295 possible tons and 22,006,151 exploitable tons.

The location of alabaster stone is precisely at the centre of the Ebro Basin, where the confluence of various factors, such as extreme climate conditions, geographic isolation and the presence of saline soils, have given rise to a steppe that is highly rich in biodiversity.

These adverse climate conditions, together with the poverty of soils, hinder the natural or man-induced regeneration of the vegetation in the areas affected by mining. Apart from this, a further two circumstances must be considered:

The exploitation of alabaster requires wide concessions in which a large area is affected in order to obtain only a limited volume of resource, which makes environmental restoration difficult.

There are numerous old exploitation sites that became abandoned before current environmental protection law was implemented, which has degraded the environment.

It comprises a fringe along the Jiloca River extending from the town of Calatayud to the village of Villafeliche. In the areas surrounding the village of Fuentes de Jiloca there are quarries from which alabaster stone and gypsum have intermittently been extracted thanks to the existence of a very thick body of alabastrine-gypsum that includes big boulders of alabaster.

This gypsum was also formed in an evaporitic sedimentary environment during the Tertiary, in the Miocene. The gypsum levels can attain between 4-12 m in thickness.

The gypsum levels include brown silica nodules and kidney-shaped alabaster  nodules. The alabaster stone ones may reach 1m3. The occurring varieties of alabaster are dark grey to dark brown and yellowish. They display great compactness and medial translucency. There seems to be a considerable volume of reserves.

We are alabaster suppliers. For more information: CONTACT US!